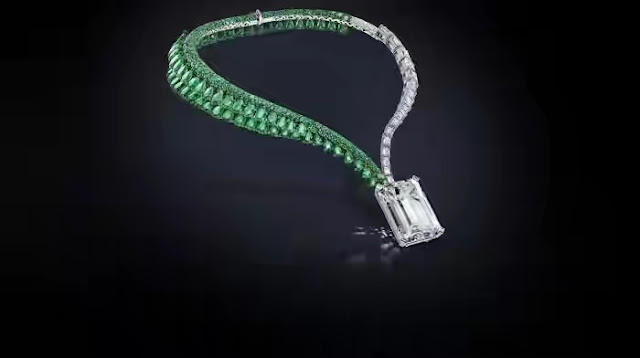 The largest diamond ever offered at auction went under the hammer in Geneva on Tuesday evening for nearly $34million, a world record for a gem of its kind, the Christie’s auction house said.

The De Grisogono 163.41-carat flawless diamond suspended from an asymmetric necklace with a trailing on the left side of 18 emerald-cut diamonds and to the right two rows of pear-shaped emeralds

Known as the “Art of de Grisogono, Creation 1,” the rectangular shaped gem is the largest flawless D-color diamond ever to come to auction. 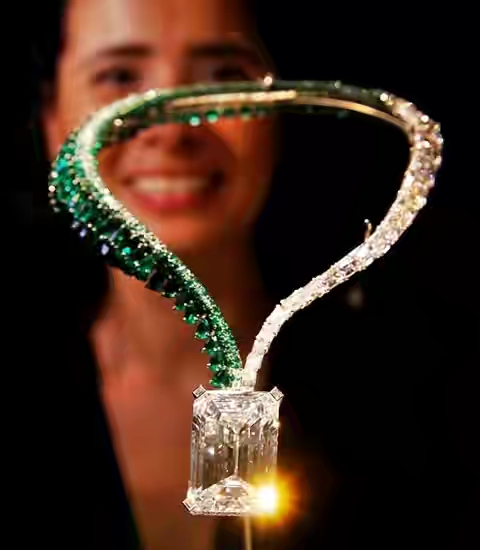 The diamond was cut from a 404-carat rough discovered in February 2016 in the Lulo mine in Angola. Given the name, “4 de Fevereiro,” it is the 27th biggest rough white diamond ever discovered and the largest in Angola. Fawaz Gruosi, founder of the luxury jewelry brand, de Grisogono, purchased the rough diamond.

He had it analyzed in Antwerp and cut in New York, where a team of 10 diamond-cutting specialists were involved in mapping, plotting, cleaving, laser-cutting and polishing the rough into the gem that was sold at auction. The cutting process alone took 11 months.

The diamond is the centerpiece of an asymmetric necklace with a trailing on the left side of 18 emerald-cut diamonds and to the right two rows of pear-shaped emeralds, offering a contrasting appearance. Gruosi believes green means good luck.

No gold is visible between the emeralds as the gems are matched and the metal is darkened to create the chiaroscuro effect that is characteristic of de Grisogono jewels. The prongs holding in place the diamond disappear under four baguette-cut diamonds creating an effect of dazzling brilliance.

The reverse side of the gold basket is engraved with the diamond’s weight and set with more diamonds. It took 14 craftsmen more than 1,700 hours to create the necklace.

This diamond necklace marks the first jewel in a partnership between Christie’s and de Grisogono to bring statement diamond jewels to the auction market.

The diamond necklace was the top lot of the sale held at the Four Seasons Hotel des Bergues. The 226 lots took in approximately $106.6 million.