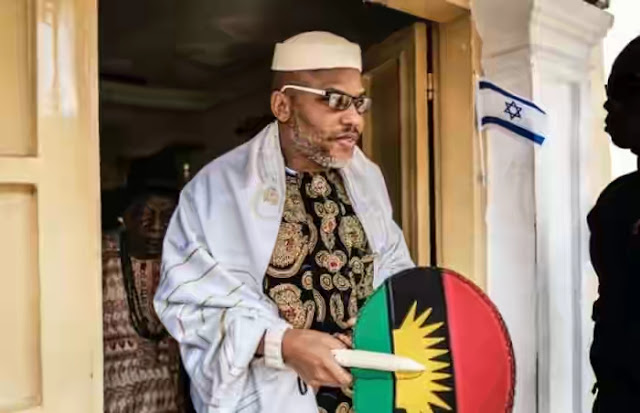 The Federal Government on Tuesday told an Abuja Federal High Court that leader of the Indigenous People of Biafra, IPOB, Nnmadi Kanu, deliberately went into hiding to avoid the consequences of himself and his group.

The Federal Government said this while urging the Acting Chief Judge of the High Court, Justice Abdu Kafarati, to dismiss the motion IPOB filed to quash the proscription order.

Represented by the Solicitor General of the Federation, Dayo Akpata, the Federal Government insisted that there was no bloody onslaught in Kanu’s house during the Operation Python Dance II, adding that it was not responsible for the whereabouts of the IPOB leader.

Akpata insisted that there was no report from security operatives to the effect that Kanu was missing.

He said Kanu “has deliberately gone into hiding ostensibly to avoid his adjourned trial and also to avoid the likely legal consequences of the activities of himself and his group”.

The government also informed the court that the proscribed pro-Biafra group was behind recent cache of arms intercepted in Lagos by the Nigeria Customs Service, NSC.

It noted that investigations revealed that members of the group imported arms, comprising of pump action rifles from Turkey.

Justifying its decision to apply for IPOB to be outlawed, the FG said the deal was brokered by a Turkish national that allegedly visited the ‘missing’ IPOB leader, shortly after he was released from detention.

It told the court that activities of IPOB “has been hampering effective policing of the South East region”, adding that the Inspector General of Police had directed his men to deal decisively with Biafra agitators who ordered restriction of movement in the South East to mark the Biafra Day celebration.”

He said “The leader of Biafra Independent Movement, BIM, and founder of the renowned Movement for Actualisation of Soverign State of Biafra, MASSOB, Ralph Uwazuruike, attested to the violent conducts of IPOB members”.

The government noted that Uwazuruike attested that the IPOB’s activities was against the principles of non-violence in the achievement of Biafra independence.

“That aside from threatening to stop Anambra governorship election in November, Nnamdi Kanu has also stated that there would be no elections in the other four South East States in 2019”, he said.