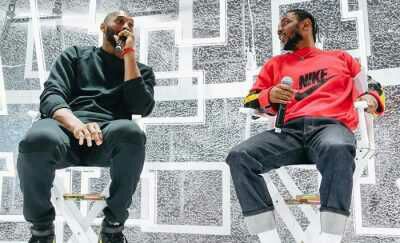 Watch Kendrick Lamar & Kobe Bryant’s Joint Interview About Greatness
Kendrick Lamar and Kobe Bryant, two Los Angeles icons who have partnerships with Nike, united for a joint interview about what it means to be great, how they became masters of their crafts, and what challenges lie ahead.Speaking at ComplexCon in Long Beach on Sunday (Nov. 5), the DAMN. MC opened up about his transformation from the hungry mixtape-making K-Dot to 2017’s Kung Fu Kenny. “There’s definitely a big difference,” he explained. “K-Dot was me prepping myself with lyrical ability and being able to go in the studio and say, ‘I want to be the best wordsmith. Anybody that gets on this track, I have to annihilate whether it’s through metaphors, punchlines, or wordplay.’ I didn’t have the actual technique of songwriting. This is the transition to Kendrick Lamar/Kung Fu Kenny. I look at Kung Fu Kenny as a master of the craft. Now you have the ability to make songs and still have the wordsmith technique and intertwine it and have a composed mentality on how to approach music.”Even renowned stars have hurdles. For Kendrick, that obstacle is time. “More time in a day to do more,” he explained. “At the level I’m at on the music level, it’s opened up so many different avenues as far as business but I always want to keep the music first. This is a challenge that I’m seeing, that’shappening right now today. Keeping the music 100 percent first and not being stagnant in other ideas and other creatives that I have to offer the world.”Kobe, who also addressed the same concepts, compared his legendary NBA playing days to Kendrick’s rapping style. “It’s the same hunger,” he said. “You step out there on the court, you’re taking heads off. I don’t want to hear Michael’s the best player in the world. I don’t want to hear they call him Black Jesus. I don’t want to hear it. You’re gonna have to show me.”
DISCLAIMER
Koreswape do not claim ownership of any of the Songs or posts that we upload or post, and any copyright infringement complaints will be executed immediately! It is our policy to honor all take-down requests!
If You Feel Your Rights Are Being Infringed Upon,Email Us koreswape@gmail.com
Share this...