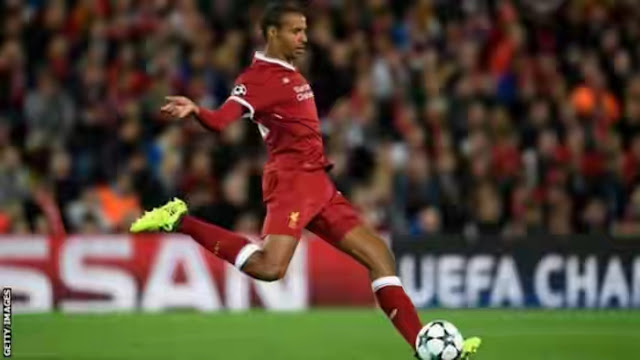 Liverpool will be without defender Joel Matip when they visit Sevilla in the Champions League on Tuesday.

Jurgen Klopp’s side are top of Group E and will qualify for the knockout stage with a game to spare if they beat second-placed Sevilla.

Matip, 26, missed Liverpool’s win over Southampton on Saturday with a thigh injury and has not travelled to Spain.

“The squad looks good. They are pretty much all here from the normal squad, apart from Joel,” said Klopp.

“He is in Liverpool and full training, so all good.”

However, Klopp expects Cameroon international Matip to be involved when Liverpool host Chelsea in the Premier League on Saturday, kick-off 17:30 GMT.

“I think there will be a big chance he will be ready for Saturday,” added Klopp. “But there was no chance for this game.

“It was a little bit too quick, but it’s all good.”

Sevilla scored a late equaliser at Anfield as it finished 2-2 in the opening group game and boss Eduardo Berizzo expects another fast-paced game in Spain.

“It was a game of rapid transitions, which made us suffer at that speed,” said Berizzo. “We were unarmed and that is what we have to take into account.

“If we lose the ball, lose it as high as possible. We must be smart and not play a crazy game. That kind of game I do not think suits us.”