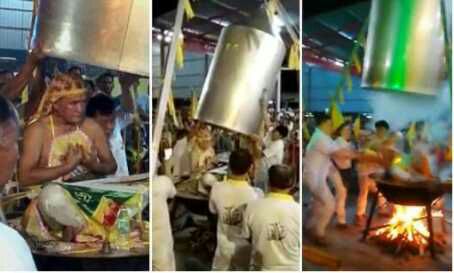 This is the moment a Malaysian self-professed ‘magic man ‘ accidentally killed himself after a steaming’ act went horribly wrong on Monday night.The magic man, Lim Ba, also known as Black DogLim, 68, was performing a “human steaming” stunt during a Nine Emperor God prayer sessionat a Chinese temple in Suala Sanglang, a small coastal village in northern Malaysia.Lim Ba was trying to ‘cleanse body and soul’whena lid was placed on him in preparation for the steaming, with his hands placed in a prayer position before a fire was lit under the wok. But after 30 minutes the performance went horribly wrong as knocking noises was heard from inside the steam cover. They quickly removed the cover only to discover him unconscious in the incident. He was pronounced dead from a heart attack and major second-degree burns. 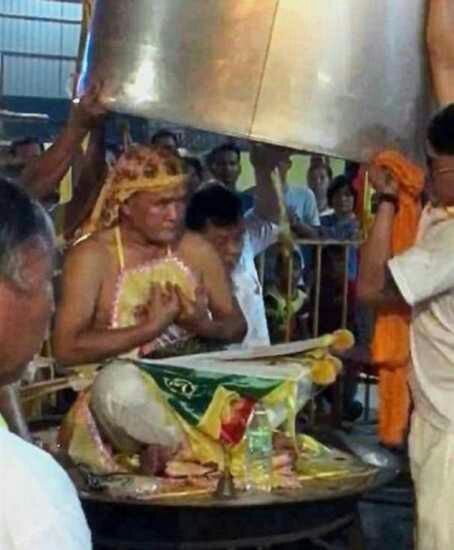 The country’s The Star newspaper reported Lim’s youngest son, Kang Huai, 32, as saying that his father began performing the steaming act around 10pm before they had heard knocking noises from inside the steam cover 30 minutes later.“By the time the ambulance arrived, my father had stopped breathing. He underwent a heart bypass last year due to on-and-off breathing difficulties,” he said, adding that his father wasalso on medication for hypertension.According to reports, Lim had been performing the human-steaming stunt for more than 10 years, despite objections from his family. He recently performed it at a Nine Emperor Gods celebration in Ayer Tawar, Perak.
Share this...