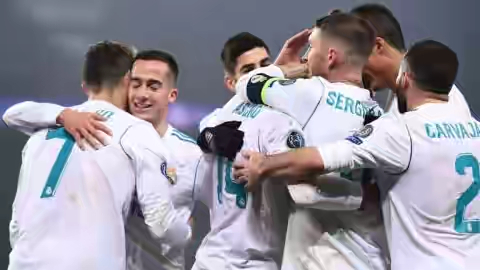 Real Madrid secured a 2-1 last-16 second-leg win over PSG to dump the Ligue 1 side out of the Champions League on Tuesday, winning 5-2 on aggregate.

Zinedine Zidane’s side had a 3-1 lead from the first leg at the Bernabeu, and after a goalless first half, it took Cristiano Ronaldo (51) just six minutes of the second period to put Real Madrid further ahead.

PSG went down to 10 men 15 minutes later as Marco Verratti (66) was shown a second yellow card, but they equalised on the night not long after as Edinson Cavani (71) diverted the ball home with his leg.

But with 10 minutes of normal time to play, Casemiro (80) sealed Real’s path to the quarter-finals as his powerful effort from the edge of the box found the back of the net via a deflection.

Man of the match: Cristiano Ronaldo.
It was a cagey start to the game in Paris but Real Madrid had the first chances in the 19th minute. Ronaldo and Lucas Vazquez nearly produced a good one-two, but the latter’s ball back was smothered by the PSG defence before Karim Benzema skied the rebound over the bar. Sergio Ramos then went close from the corner, but saw his effort superbly pushed away by Alphonse Areola.

Real Madrid went close again 19 minutes later but were denied by the PSG goalkeeper. An unmarked Benzema was set away down the left before cutting into the box, but his eventual shot was superbly turned behind by Areola’s outstretched leg.

But PSG were also testing Real Madrid goalkeeper Keylor Navas in the final minutes of the first half. Verratti picked out Angel Di Maria down the right of the box before the Argentine attempted to find the waiting Cavani, but his cross was collected down low by Navas, before he denied Kylian Mbappe at the near post minutes later by pushing his shot behind the post.

Team news
PSG kept just four players in the XI from the weekend’s win against Troyes, with Alphonse Areola, Thiago Silva, Adrien Rabiot and Angel Di Maria making the cut. Real Madrid made five changes with Raphael Varane, Marcelo, Lucas Vazquez, Marco Asensio and Mateo Kovacic coming into the XI.
Six minutes after the restart and Ronaldo continued his run of scoring in every Champions League game this season. Marco Asensio raced down the left before sliding a superb pass to Vazquez in the box, who in turn fired the ball across the face of goal for Ronaldo at the back post. Of course, he made no mistake in heading home to put Real Madrid in front on the night.

Things got worse for PSG before they got better, though, as they went down to 10 men in the 66th minute. After picking up a booking for a foul on Casemiro in the first half, he was shown a second yellow for dissent after he felt he should have been awarded a free kick and sent off.