Skip to content
Real Madrid have reached a verbal agreement to sign Brazil Under-17 international Alan from Palmeiras with the playmaker set to move to the Spanish capital next summer, according to AS. 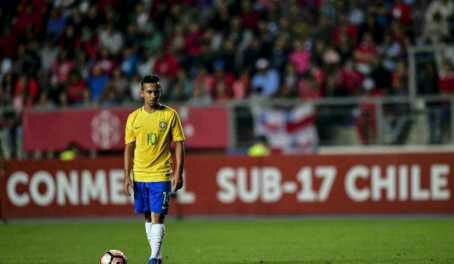 Alan, who is currently playing at the Under-17 World Cup, would initially link upwith Real Madrid’s Castilla side in the Segunda Division B to help him acclimatise to Spanish football.Alan has a €50m release clause in his contract with Palmeiras but Real Madrid will look to negotiate that down as he is in the final year of his contract.Alan is an attacking midfield who plays behind the striker and may grow into a veryinteresting player. However, it’s clear that he will not be capable of helping Madrid’s first team in the near future and this wouldbe an investment for the long term just like Vinicius Junior or Martin Odegaard.This is Real Madrid’s new transfer policy as Los Blancos are trying to recruit young talent all around the world and then try todevelop those players in Spain.
Share this...