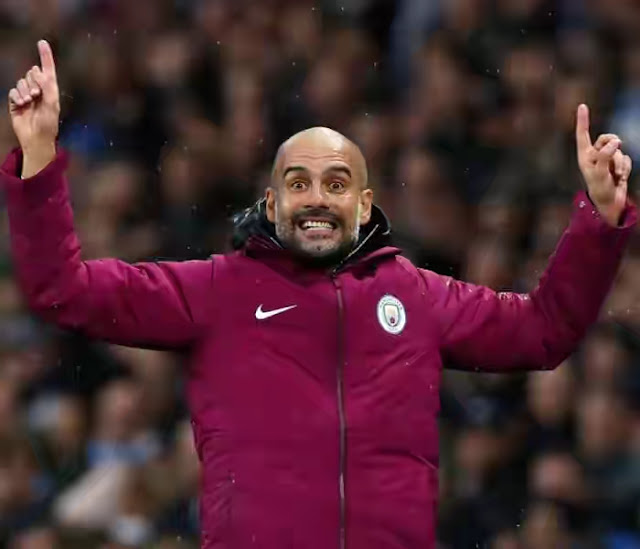 Manchester City manager, Pep Guardiola, has said he encouraged his players to celebrate their derby victory but insists they did it in the “correct way.”

United manager, Jose Mourinho, was hit with an empty plastic bottle and had water squirted at him. He was also doused with milk from a flying carton, after he entered City’s dressing room, to demand the players show “more respect”.

Mourinho was confronted by goalkeeper Ederson, who made two terrific saves towards the end of the match and both men shouted at each other in Portuguese.

It is also understood that United players followed Mourinho into the corridor between dressing rooms, sparking the skirmishes. Some players tried to swing punches while police looked on in disbelief.

Guardiola’s assistant, Mikel Arteta, reportedly received a cut to the head which left him bleeding.

Asked if the celebrations were over the top, Guardiola told a news conference on Tuesday: “Definitely not. We won a derby, what do people expect – we don’t celebrate?

“It was the same after the Southampton game, that was 96 minutes or something like that, but we were happy. It was a derby, it was the closest rival.

“[Our behaviour] was correct, believe me. We jumped because we were happy. People have to understand that we were happy. I think all the teams around the world, when they win a derby they are so happy. When we won with Bayern we were happy, with Barcelona we celebrated.

“We were inside, it is normal. We didn’t do anything exceptional, we did what we did in the past and what we will do in the future.

“We try to celebrate, because when we lose we try to accept the defeat, but when we win we celebrate. We celebrate in the right moments, for example we celebrated in Napoli, you have to do that, but inside [the locker room].”