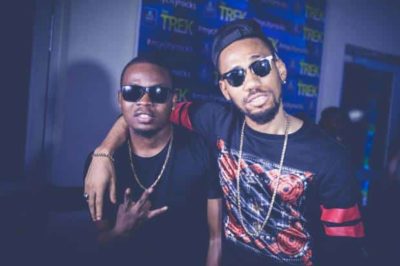 TX News had earlier reported that violence erupted at the planned Olamide & Phyno‘s Toronto tour where the two were supposed to perform but did not show up. The promoter of the show announced to the gathered audience that Phyno’s absence at the show was due to an illness. The audience must have felt scammed, having paid for the ticket, so they reacted in a way that led to violence, causing properties at the venue of the event to be damaged.

“We humbly apologize to our fans who bought tickets for The Culture Tour in Canada. Olamide and Phyno love and adore their fans and did everything within their power to ensure they performed at the event. However the promoter Prince George Entertainment defaulted on the our agreement . It was announced at the venue during the show that Phyno was sick and he couldn’t perform which is a lie . Phyno wasn’t sick and was/is in good health. Olamide and Phyno met up with all obligations to make the event a success and where present in Canada ready to perform but the promoter Prince George Entertainment refused to honor our agreement. Our humble apologies once more as we understand a lot of fans sacrificed so much to be at the event.” 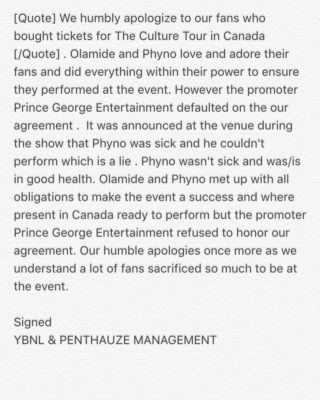