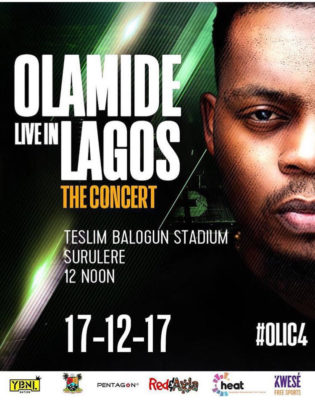 ‘Wo’ crooner Olamide is back with the fourth edition of his concert tagged Olamide Live in Lagos: The Concert.

Organized by YBNL, Red & Axla, Pentagon and powered by the Lagos State Government, this year’s edition is slated to hold at the Teslim Balogun Stadium Surulere, Lagos on the 17th December, 2017 at 12noon.

The choice of the stadium which has the capacity of over 25,000 people as the venue for a rapper’s concert is undoubtedly another first as concerts go in Lagos.

Olamide Live in Lagos: The Concert will definitely bring Lagos to a halt with the release of his new album titled ‘Lagos Na Wa’. It is clear that 2017, just like every other year in recent memory, is the year of Olamide as he gives back to his fans.

Olamide Live in Lagos: The Concert is on a track to set standards, break existing records, and give fans what they truly crave for and deserve.