Skip to content
Retired footballer, Jay-Jay Okocha, has revealed that he regretted his first season in England due to his injury troubles, and named Manchester City midfielder as the best in the Premier League at the moment. 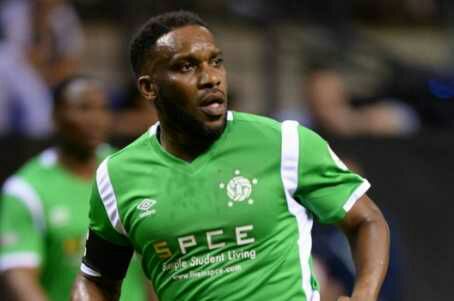 While speaking in an exclusive interview with Goal.com, Super Eagles legend, Austin ‘Jay Jay’ Okocha, whose popularity has endured beyond the end of his playing career, as evidenced by his relevance in modern day football, has opened up on his failure to win the Premier League.The African football legend whose creative genius on the pitch and inventive brillianceas a player contributed to the growth of the modern game, also explained why he rates Belgian and Manchester City star, Kevin Debruyne as his best in the EPL this season.Here are excerpts from the chat;In 1988, Paris Saint-Germain splashed £10 million to make you Africa’s most expensive ever player then. And four years down, youmoved to Bolton FC on a free transfer? Why did you choose Bolton?I wanted to play in the Premier League and Bolton offered me that opportunity at that time and that was why I signed for Bolton.You are perhaps the only Nigerian to have captained a side in the English Premier League, could you provide insights into some of the things you did to keep the boys on track and maintain harmony in the dressing room?It’s is all about you leading by example and making sure that everyone is okay, you are like the first child of the family and you feel like you are the oldest as well because it comes with a huge responsibility, you have to find a way to make sure that everyone is in good spirit and you have to also show goodattitude towards training. It was a responsibility that I welcomed with both hands and I enjoyed every bit of it.We have seen a drastic reduction in the number of Nigerian players plying their trade for top teams in the Premier League. What do you think the problem is?To be honest, we failed to build on the foundation that we laid, and that can only come from our league back home. We’ve failed to improve our league even though it is a bit better now but we still have a long way to go to be able to produce players thatcan compete at that level, so it is not a rocket science, we just have to make sure that we put a good structure in place that will enable our youths learn about the basis early enough to be able to play for those bigclubs. 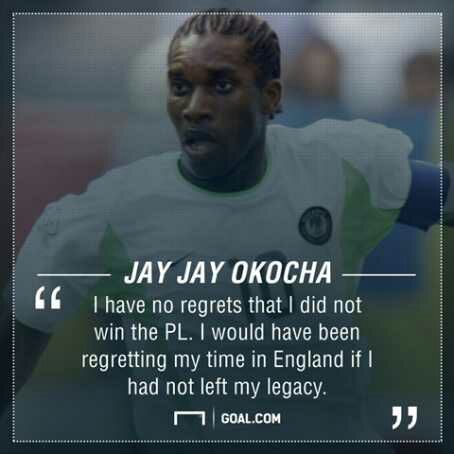 Looking back, you never had a chance to lift this trophy with Bolton in your four years playing in the English Premier League. How did that make you feel?Well, I have no regrets that I did not the Premier League. I would have been regrettingmy time England if I had not left my legacy, some people are lucky enough to be at the right place at the right time even without playing many games, they won it. But, the most important thing for me is the opportunity that you have. I think I maximised my opportunity at Bolton, changing the mindset of the people from when I arrived till the time I left. Bolton was one of the relegation candidates when I got there but we took the club to another level and even had the opportunity to playfor the first time in the Europa League. So when I look back at what I achieved at Bolton, I think it makes me happy because itwas never on our agenda to go for the title.And have you thought of why the English Premier League is the most popular league in the world?Without any doubt, it is the publicity and also the money that is in the PL now is unbelievable so, they have taken it to another level, it is a league where every player now wishes to come and play. I think it is also the most demanding league; the pace of the game in the EPL is something elseand rightly for me is maybe the best league in the world.Let’s talk about the Nigeria national team. How do you feel about Super Eagles’ qualification for Russia 2018?I am very happy about that because we havebeen struggling for a while now and for us tocome out of that group on top shows that weare not too far from being where we are supposed to be. I know the expectations are very high in this country but you have to also realize that in a country of almost 200million, we should be able to have a good strong national team, so I am delighted that they have qualified now but also at the sametime, it is about time to challenge ourselves and believe that we are good enough not just to be partakers but to make an impact.Isn’t it ironic that your nephew, Alex Iwobi scored the only goal that sealed qualification for the global football showpiece?There are some things you cannot change, I never thought that it would happen but I am so glad that the young man is doing so well and also that he is not regretting the fact that I convinced him to play for Nigeria, so it has worked out well in both ways so I am delighted.You played in three Fifa World Cups and captained Nigeria on one occasion. How would you describe the experience, and what advice do you have for the Super Eagles as they Grace the 2018 tournament?I think it is where every football player wants to be because people like us will have prayed to be there but I would say that nothing is impossible, it is all about staying focused, setting the right targets for yourself and just show commitment and it is all about playing six or seven matches and ifyou can sacrifice and believe that, you can play at least maybe five games in the tournament, you are talking about semifinals. 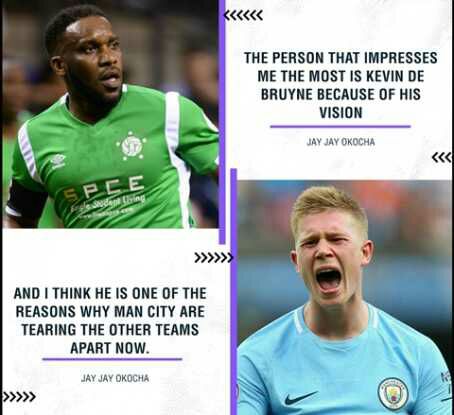 Who is your favorite player in the Premier League right now?At the moment, the person that impresses me the most is Kevin De Bruyne because of his vision, his unselfishness, and I think he isone of the reasons why Manchester City are tearing the other teams apart now.Who were the best players you played with during your first time in the English game?Youri Djorkaeff, Ivan Campo, El Hadji Diouf– love him or hate him, he was instrumental to what we achieved then, Fernando Hierro and Hidetoshi Nakata from Japan. So we hadall nationalities in one team and it was greatto have these players in the team.What were your best and worst moments in the EPL?My worst moment I would say was my first season because I did not realise how tough the EPL is and I did not realise early enough that I signed for a struggling team, but then at the end of the day I will say my greatest moment in EPL was the day that we survived relegation, we survived after the last game of the season.Do you still remember the best advice you were ever given during your playing days?It’s for me to believe in myself, believe in my ability, never let anybody bring me downand keep working hard because talent is notgood enough, you have to work to earn whatever you want to achieve, so hardwork is key
Tags: SPORT ARENA