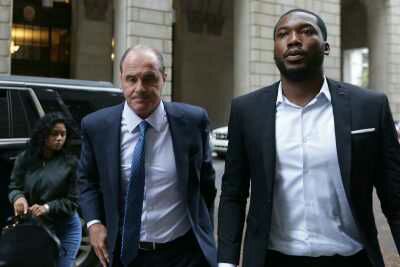 Meek Mill Sentenced to 2-4 Years in Prison for Probation ViolationMeek Mill’s recent slew of arrests isn’t getting past the judge, as he sentenced the rapper to a minimum of two years behind bars, according to TMZ. The rapper went to court earlier today in Philadelphia to deal with probation violationsstemming from his 2009 case for drugs and weapons possessions. The violations were a product of his reckless driving arrest in New York City where he was booked after he was caught popping wheelies on his dirt bike.He violated probation again for his involvement in a fight at a St. Louis airport earlier this year. He got off lucky with the reckless driving charge, accepting a deal from the District Attorney that said the charge would be wiped clean from his record if he stayed out of trouble for the next six months. The assault charge from the airport was dropped. However, the fact that he violated his probation was the driving force behind his sentence. On top of that, he violated probation in 2015 but was sentenced to house arrest. It’s not looking so good for Meek Mill right now.BREAKING: Rapper Meek Mill sentenced to 2 – 4 years in state prison for probation violations.
DISCLAIMER
Koreswape do not claim ownership of any of the Songs or posts that we upload or post, and any copyright infringement complaints will be executed immediately! It is our policy to honor all take-down requests!
If You Feel Your Rights Are Being Infringed Upon,Email Us koreswape@gmail.com
Tags: ENTERTAINMENT