Skip to content
The Commissioner of Police in Kwara state, Lawan Ado, issued this warning when he met with operatives of the F-SARS (SPECIAL ANTI-ROBBERY SQUAD) at the Police Headquarters Ilorin, the state capital. 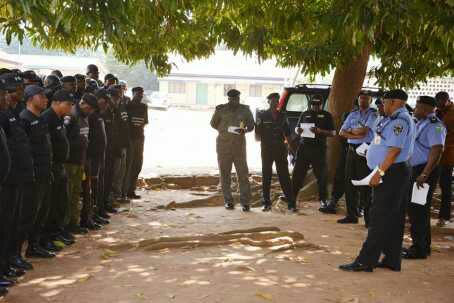 Read a statement from the command below‘The Commissioner of Police Kwara State Command, Cp Lawan Ado, while meeting with Kwara State Command’s officers and operatives of the F-SARS (SPECIAL ANTI-ROBBERY SQUAD) at the Police Headquarters Ilorin today, declared to the operatives that enough was enough, that they either sit up or get booted out of the outfit. This was consequent upon different misconducts attributed to the outfit in recent times, which has brought some level of disrepute to the image and the good name the command has toiled so much to maintain, allegations of extortion, checking of telephone sets of citizens, laptops and labelling every young man seen in a car as being a yahoo boy should stop forthwith, drunkenness especially while on duty is an offence against discipline, he reiterated that, he would not hesitate to wield the big stick on any officer whose actions or inaction would drag the jealously guarded name of the Police in the mud.He, for the Upteen time, re-echoed the directive of the Inspector General of Policeto the effect that, the ban on road blocks on our high ways remains in force, any policeofficer arrested for disobedient to this directive will be severely dealt with. While also assuring the men of the support and protection of the Police authority at all times, he promised that the Command would do everything within its powers to make their work easy, he admonished the officers to be civil in all their dealings with the members of the public, while also telling them that, their being members of the Special Anti-Robbery Squad does not in any way differentiate them from other policemen and as such they must at all times abide by their rules of engagement, dress code and must be neatly turned out as they were not immuned against sanctions.He also reminded the officers that, a male police searching a female suspect is a misnomer, searching of telephone set belonging to accosted citizens by SARS operatives, escorting suspects to the ATM machine to collect money, or forcing suspectto make electronic money transfer is robbery, he further declared that any officer arrested doing any of the above willbe dismissed and charged to court.He told the officers that their welfare is a priority to the Police management, saying their job was not an easy one. He admonishedthe good people of Kwara state to continue to support the team and volunteer information so as to enable the police discharge its responsibility adequately’.
Share this...