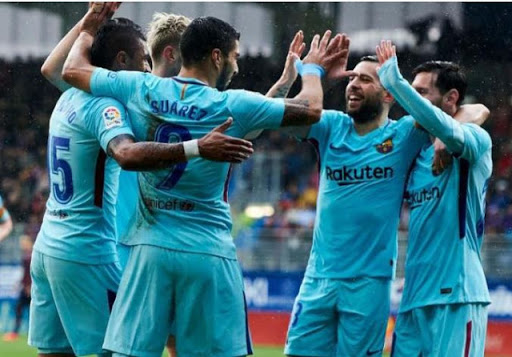 Barcelona on Saturday defeated Eibar 2-0 at the Municipal de Ipurua stadium to go 10 points clear in the LaLiga table.
Striker Luis Suarez and defender Joldi Alba got the goals for the Catalan club.
Ernesto Valverde side got the lead in the 16th minute as Suarez received a precise pass inside the box from Lionel Messi and he beat the goalkeeper with a neat finish into the bottom right corner.
At the end of the first 45 minutes, it was Barca that walked into the tunnel with a one goal lead.
The second half with much intensity and pressing from the visitors which led to Eibar seeing a red car.
Alba later got the second goal in the 88th minute.
The victory will provide the much-needed boost for the Spanish league leaders as they prepare to face Chelsea in the Champions League on Tuesday at Stamford Bridge.
Tags: SPORT ARENA