Skip to content
Rap Titan, Kwesta is currently in the studio putting in all of the hard work for his massively-anticipated album. Now, the “ Ngiyaz’Fela Ngawe“ star has revealed he won’t be snubbing local artists for the project, even though he will also be featuring heavyweight international stars.
Kwesta is faced with an uphill task of bettering his previous “Dakar II“ album; especially with the massive success of that project of musical art.
That success even saw him raid the South African Music Awards (SAMA23) , as he swept a whopping 6 awards – the highest for any Hip Hop act in history. Asides from that, he has also been able to clinch platinum status with the project as well as tracks such as “ Ngud .”
Due to that pressure, but newly found clout and status as well, it is not a surprise global artists such as Rick Ross , Wale and
Tory Lanez have been penciled down to make a cut on Kwesta‘s upcoming album.
However, the Katlehong, Ekurhuleni, Gauteng-born lyrical pugilist has remained true to his amazing personality and has revealed local stars would make the cut as well. In an interview with Zkhiphani, the highly-rated star disclosed the success he achieved is not enough reasons to skip working with local rappers.
“So I am back in studio working on another album. I don’t know if you’ve seen but there has also been international collaborations that I have been doing.
That doesn’t mean however that I won’t be doing collaborations with South Africans artists, I just wanna make this album a little bigger than just South Africa. So I’m pulling up all the stops,” he said. 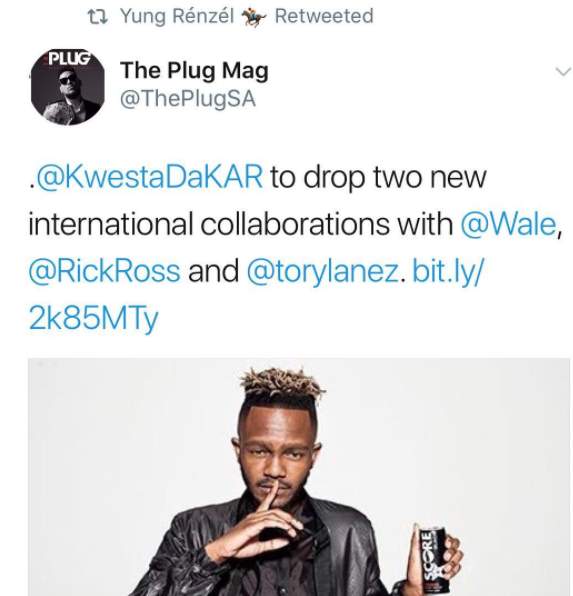