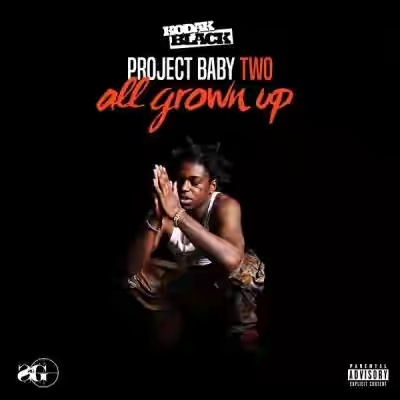 After releasing his Project Baby 2 mixtape back in August, Kodak Black is ready to come through with the rare sequel to a sequel, Project Baby Two: All Grown Up. While there has yet to be any real information about this project, Kodak did post the cover art on Instagram, along with the caption #KodakBlackFriday, which seems to indicate that his upcoming project will likely be released on Black Friday, November 24th. It’s highly likely that All Grown Up is a mixtape, as Kodak has always been an artist with a deep catalog; for some context, Kodak has already released two albums (Painting Pictures & Project Baby 2) a collaborative mixtape with Plies called F.E.M.A, and countless loosies throughout the year. Therefore, it stands to reason that Kodak has all intentions of blessing us with one more drop before year’s end.However, it might not be a new album at all; considering the specifics of the title, there is an outside chance that Project Baby Two: All Grown Up is something like a deluxe version, boasting a few new songs. But that doesn’t feel like Kodak’s style, does it? Either way, there isn’t much time left in 2017, so we’ll take all the new music we can get.

In recent Kodak news, the Floridian rapper recently had to cancel a concert after a drunk-A$$ fan channeled his inner Spider-man and decided to climb all up on some scaffolding. After reaching a dangerous height, security halted the concert, and the would-be climber was subsequently pelted with boos from both fan and Kodak’s entourage alike. Once the fan managed to get down, he attempted to flee the scene, only to be apprehended by police and arrested for breach of peace. You can read more about that by hitting the link above, and in the mean time, hold tight for Project Baby Two: All Grown Up.