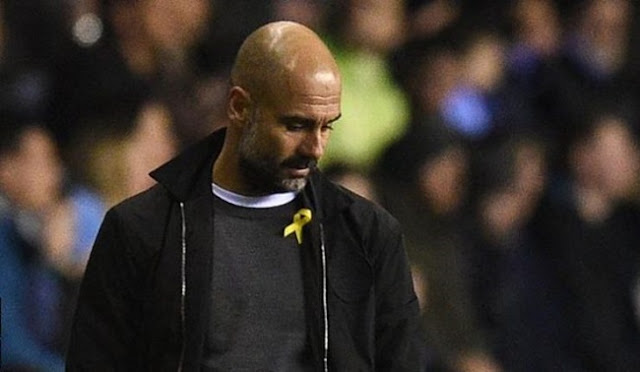 Manchester City manager Pep Guardiola has been charged by the Football Association for “wearing a political message, specifically a yellow ribbon”, during the City’s FA Cup Loss to Wigan

Pep Guardiola breached the governing body’s kit and advertising regulations by donning a yellow ribbon as a symbol of support for imprisoned politicians in his native Catalonia.

Guardiola was warned about the issue twice in mid-December and now faces disciplinary action for “wearing a political message, specifically a yellow ribbon”.

Two key members of the Catalan independence movement were held without bail after an independence vote in October, which the Madrid government deemed illegal.

Guardiola had said in November: “If one day in prison was already too much, look how many days they’ve been there now.

“Like everybody knows, hopefully sooner or later I can stop wearing it.

“All the politicians that are in prison, I hope they can leave and go back home soon with their families and continue living the lives they deserve.”

Elsewhere, a private jet owned by the former Spain international was reportedly searched by police hunting for the fugitive former president of Catalonia Carles Puigdemont.

The former Barcelona boss has until March 5 to respond to the FA’s charge.