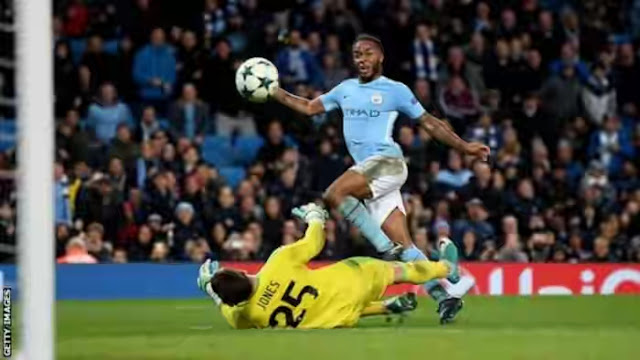 Having beaten Giovanni van Bronckhorst’s team 4-0 in Rotterdam, the expectations were that City would win handsomely, but having made seven changes they were not at their fluent best against better organised opponents.

With Sergio Aguero having missed a number of chances and Yaya Toure firing a free-kick just wide, it looked like the game was heading for a goalless draw until Sterling broke through the visitors’ defence via a one-two with Ilkay Gundogan and finished neatly.

It preserves their 100% record after five matches of this season’s Champions League and extends their unbeaten start to the overall campaign to 19 games.

City could also have been looking at a first defeat of the season had Sam Larsson and Steven Berghuis shown greater composure in front of goal, the latter striking the bar with a rising shot from close range in the second half.

With Napoli beating second-placed Shakhtar Donetsk, City can travel to Ukraine on 6 December knowing even a defeat cannot deny them what should in theory be a more favourable draw in the last 16.

It also allows Pep Guardiola to rest players for a game that immediately precedes the Premier League leaders’ trip to second-placed Manchester United.

They will definitely be without influential midfielder Kevin de Bruyne for the final group game after the Belgian picked up his second yellow card of this season’s competition to incur a one-game suspension.

This may well offer an opportunity for one of the stars of England’s Under-17 World Cup-winning side, midfielder Phil Foden, who played the final 15 minutes of Wednesday’s game as replacement for Toure, who at 34 is twice the age of the player dubbed ‘the Stockport Iniesta’.