Skip to content
Reports have emerged that President Muhammadu Buhari will present the 2018 Appropriation Bill to the National Assemblyon Tuesday, after the Federal Executive Council (FEC) approved the draft budget estimates today. 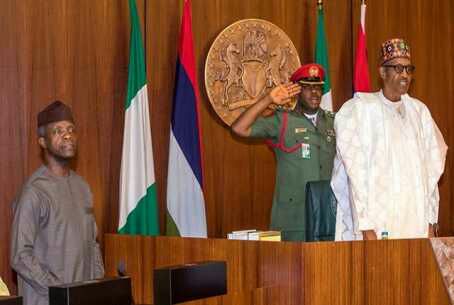 A source, who spoke authoritatively withThisDay, said the bill is heading to the legislature early to give legislators ample time to deliberate on and pass in good time for its implementation to begin on January 1, 2018.“Arrangements have been made for President Buhari to lay the budget on Tuesday,” the source said, adding: “It is our hope that the National Assembly would expedite action on itand get it ready for presidential assent by December 2017.”The Minister of Budget and National Planning, Senator Udoma Udo Udoma, had at the end of FEC meeting at the presidential villa, Abuja told State House correspondents that the Council will liaise with the National Assembly to determine when the president will submit the draft estimates for the consideration of the two chambers.Mr. Udoma, however, declined to comment onthe details of the approved budget, saying the Nigerian constitution only allows the president to give out the details and he willdo so when the National Assembly is ready toreceive the draft.The presidency had yesterday on its Twitter handle, @NGRPresident, tweeted the shift of the FEC meeting to today and explained that the sole agenda would be 2018 Budget.“Federal Executive Council (FEC) meeting will hold tomorrow (today), Thursday, October 26. Agenda is#Budget 2018, which is currently being finalised,” the tweet read.
Share this...