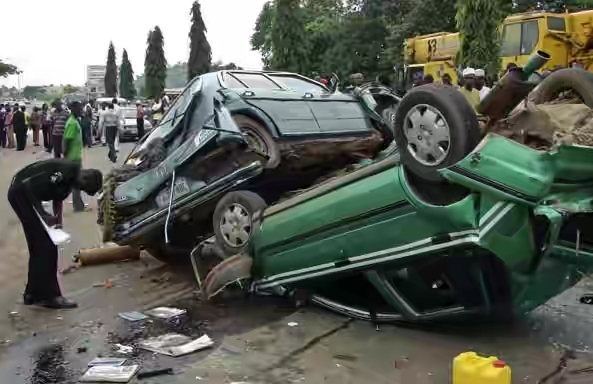 How sad as journalist in Kogi State were jolted over the death of one of their own, Mr. Abdullahi Ibrahim, a reporter with the African Independent Television, (AIT).

Ibrahim died alongside his family members in a ghastly motor accident when he travelled to his hometown, Okaba, in Ankpa Local Council of Kogi State on Thursday.

He was preparing for the upcoming wedding of his daughter in December. The accident occurred between Ojodu and Ochadamu, along Ajaokuta- Ayingba high way. The reporter was driving his Peugeot 504 Saloon Car in company of his three children and his pregnant wife when the accident occurred.

According to an eyewitness, Ibrahim had a head-on collision with a Toyota hiace bus belonging to a popular transport company. “He was trying to overtake him on top speed while also negotiating a bend,” the witness said.He died on the spot with his three children and pregnant wife.

His wife and children were seen at the press centre, where he bought snacks and drinks for them before going for the repairs of the car in preparation for the journey.He was even said to have distributed his daughter’s wedding cards to colleagues and friends on that fateful day.

Ibrahim, described as a crack reporter, had worked with several newspapers including the Sentinel, National Mirror, Royal Time. He was the publisher of The Trumpet before joining the AIT.

He was said to have lost his first wife and daughter about five years ago in mysterious circumstances.Reacting to the demise of the journalist, the Chairman of Correspondent Chapel of the Nigeria Union of Journalists, Friday Idachaba, expressed shock over the sudden death of the journalist and his family members.

Ddescribing him as: “A very brilliant and hardworking journalist, who has carved a niche for himself “.He condoled with his family members and prayed for the fortitude to bear the irreparable loss.