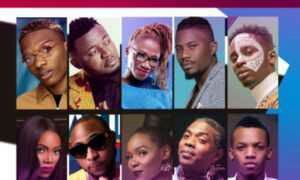 The horizon of Nigerian music is broadening, beyond the shores of Africa to the field of global music. Nigerian music is like the new gold causing people of the west to rush to the market. Good for us because with the growing rave around our music; our artistes move steps closer to that very elusive Grammy award. Here’s a list of 10 already internationally recognized Nigerian artistes:

He might not be the pioneer of this movement but no doubt when you think ‘Africa to the world,’ his name first comes to mind. The sold out concerts and record breaking collaborations speak for him. Wizkid is no doubt Africa’s biggest music export of this age.

The vibe to his songs have somehow transcended across borders.His biggest hit yet ‘Sekem’ received warm reception across many nations. The song was also recognized by the highly sophisticated Hollywood after it was used as a soundtrack on the Disney movie ‘Queen of Katwe’.

From the onset, it was obvious Asa’s music could not be contained within the boundaries of her home-country; Nigeria.The indie soul and fusion artiste has a way of using her music to connect with people of diverse origins and her outings can confirm that.
4.Ycee

There is an evolution in the Afrobeat scene and we can witness it in form of the ‘Pan-African sound’ that the new cats are exporting to the world audience. Part of this movement is the song ‘Juice’ which is enjoying massive acceptance from many of the Westerners.
5.Mr Eazi

Thanks to Mr. Eazi, theBankumusic is now steps closer to global dominance. The singer has become a favorite in many parts of the United Kingdom and America. Mr. Eazi’s Detty world tour has recorded sold out shows in several western countries.

Tiwa comes highly recommended and in hot demand by her upper west side colleagues. Her pan-African music style has made her the topic of discuss in circles around the likes of JayZ, Brandy, Fat Joe and Chris Martin. Moreover, her working stint with Mary J Blige, Whitney Houston, Kelly Clarkson and Andrea Bocelli had her adequately equipped for this takeover.

The 30 billion gang leader is one spectacular African artiste breaking boundaries on the international front, and it dates far back to the days of his come up. His song ‘Skelewu’ was thesound that launched him on the global front, even causing a trend. Today, icons like Ronaldo, Taraji P. Henson and R.Kelly have endorsed him.

Girl with the sauce took the music industry like a raging storm. Ms. Alade has successfully grown her craft into a moving force that lights up stages from London to Paris, Germany, Canada and of course America, where she sells hermama Africamusic to her fans using her amazing vocals and energetic dance moves.

Contrary to popular belief, Femi worked so hard to establish himself as an artist independent of his father’s massive legacy. He’s taken the gospel of Afrobeat to locations in the UK and US, earning him collaborations with some industry titans, and 4 Grammy nominations in the World Music category.

It wasn’t until after the release of ‘Pana’ before the slim daddy stamped and solidified his arrival on the international scene. Now, not only is he shutting down shows around the world, his talent already has him tipped by music giants, Sony, and he sits on the rollcall of one of the world’s most revered entertainment brands.If you think we have erroneously left out any names, please share them with us in the comments section below.